May 24, 2018
by NML Readers Advisory Team Leave a comment 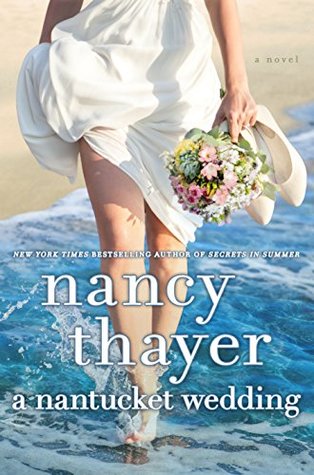 Please join us as we welcome Nancy Thayer back to the Nevins Library!  She will be talking about her latest book:  A Nantucket Wedding.

A few years after losing her beloved husband, Alison is doing something she never thought she would do again: getting married. While placing the finishing touches on her summer nuptials, Alison is anxious to introduce her fiancé, David, to her grown daughters: Felicity, a worried married mother of two, and Jane, also married but focused on her career. The sisters have a somewhat distant relationship and Alison hopes that the wedding and the weeks leading up to the ceremony will give the siblings a chance to reconnect, as well as meet and get to know David’s grown children.

As the summer progresses, it is anything but smooth sailing. Felicity stumbles upon a terrible secret that could shatter her carefully cultivated world. Jane finds herself under the spell of her soon-to-be stepbrother, Ethan, who is as charming as he is mysterious. And even Alison is surprised (and slightly alarmed) by her new blended family. Revelations, intrigue, resentments—as the Big Day approaches, will the promise of bliss be a bust?

Books will be available for purchase.  Refreshments will be provided.

To register for this event, CLICK HERE.  For more information, contact Fran or Sarah at   978-686-4080 x20 or  ssullivan@nevinslibrary.org

Please join us in welcoming author Randy Susan Meyers to the Nevins Memorial Library!  She will be here on Saturday, September 19th at 1pm.

Her most recent novel, Accidents of Marriage received a starred review from Kirkus who wrote “Beautifully written, poignant and thought-provoking, this novel refuses to succumb to stereotypical reader expectations, making it even more memorable.”

Meyers’ debut novel, The Murderer’s Daughters, was a finalist for the Massachusetts Book Awards, named a “Must Read Book” and one of the “2011 Ten Best Works of Fiction” by the Massachusetts Center for the Book.  It was also a nationwide Target Book Club Pick.

Meyers’ second novel, The Comfort of Lies, was defined by the Boston Globe as “Sharp and biting, and sometimes wickedly funny when the author skewers Boston’s class and neighborhood dividing lines, but it has a lot of heart, too.”

Meyers is a founding member of Beyond the Margins, a multi-writer site dedicated to the craft of writing and the business of publishing.  She is also a regular contributor at The Huffington Post and teaches at Grub Street Writing Center.