It’s that time of year again: as the crocuses poke their little purple heads out of last year’s mulch, the first zombies begin to claw their way through the newly-unfrozen ground. I don’t know who to root for, so to speak. I dig plants and I dig zombies. Is there no universe where weed all just get along?

For now, my loyalties remain divided between the grains and the brains. If you’re still deciding which group to attack with a garden trowel this year, then these books are for you.

Wicked plants (and The Drunken Botanist) by Amy Stewart

Amy Stewart has it all for you: first your favorite plant will poison you literally to death, and then it will get you so stinking drunk that you’ll come back as a zombie. At last, synergy.

Not sure why everyone has it in for zombies, but if you’re one of the hordes of hostile anti-zombie activists out there, here’s the key to understanding the undead. And re-deading them, if you’re so inclined.

Day of the Triffids by John Wyndham

Personally, between a zombie who happens to be hungry and a plant that really just wants to kill you for no reason, and can also run after you to make that happen, I’ll choose a zombie any day. Give that guy some brains and he’s good. Give a triffid some brains and it’ll just keep murdering the heck out of you. There’s no negotiating with some people. Or plants.

On a mission to zombie-infested New York in search of AIDS drugs, Dekalb (our hero) discovers a zombie that has retained its intellect and identity. He’s kind of a doof, so he decides not to shoot it. Thus do his problems multiply.

Secret Life of Plants by Peter Tompkins and Christopher Bird

Tompkins and Bird are all about humans and plants and their mystical spiritual connection. If you’ve ever just wanted to do some yoga with a tree, then this is the book for you. Don’t be surprised if the tree wins, though.

Gwen has never really gotten past the whole “eating brains” thing. C’est la vie: if she doesn’t chow down on some grey matter on the regular, then she gets kind of too cranky for polite society. But you know what they say: you are who you eat.

What a Plant Knows by Daniel Chamovitz

So, remember that time that you played Metallica at that forsythia bush? Well, I hope you’re happy, because it took that personally. Daniel Chamovitz thinks that you ought to get right over there with some Bach and apologize.

A Plague of Zombies by Diana Gabaldon

That’s right: even the great Diana Gabaldon of Jaime and Claire fame can’t resist the siren call of “braaaains!” When Lord John goes to Jamaica, he’s never heard of a zombie before. He’ll know a lot more about them when he leaves. If he leaves, that is.

Botany of Desire by Michael Pollan

Pot. French fries. Hard apple cider. And the tulip, because plants really do make people do stupid things sometimes. Michael Pollan is about to tell you about all of it.

Zombies vs. Unicorns edited by Holly Black and Justine Larbalestier

OK: I forgot about the unicorns. The migratory spring unicorns. So now it’s Plants vs. Zombies vs. Unicorns. I kind of hope that the plants and zombies gang up against the unicorns, because if you read the original unicorn myths, they were kind of jerks and had some weird symbolic implications. Somewhere in this compilation of short stories, I’m sure zombies and plants will conspire together to bring down those glorified ponies once and for all.

Incredible but true! Well, not quite yet. But while you’re just hanging out and waiting for the future to happen, why not take a look at the literature and see what we’re in for?

The hallmark feature of a dystopia is that the society in question is actually a messed-up utopia. Often, enough people who exist within that system live well enough that they don’t care to challenge the underlying issues, which may or may not involve teenagers fighting to the death on live television. We’re all familiar with The Hunger Games, Divergent, The Giver, and other popular YA dystopias. But for the serious fan of messed-up future societies, the genre has much more to offer.

The Handmaid’s Tale by Margaret Atwood

A classic, this story chronicles a world that has gone through a crisis in population implosion. The result: a society where fertile “handmaids” are used to provide chosen families with healthy children.

House of the Scorpion by Nancy Farmer

Matteo Alacrán is a lucky boy: he has wealth, comfort, and everything a child could want. Except, of course, that he is also the clone of a powerful drug lord, and his sole purpose in life is to donate all of his vital organs to the 143-year-old criminal.

The Dispossessed by Ursula K. LeGuin

An anarchist planet. A doubter. LeGuin will make you believe that time can encompass philosophy and ethics, that an anarchist society can still survive by unyielding and unspoken laws, and that one person’s ideas can change humanity.

Statistical probability dictates the creation of new interstellar civilizations. People meet and successfully fight giant space bugs. Well-mannered aliens contact us for theological debates. Hitchhikers endure. A lot of science fiction is about the future. In fact, you could even say that all of it is about the future. Here are some of the best examples of the genre.

The Windup Girl by Paolo Bacigalupi

Welcome to the Future! We hope you’ve wound up your motorcycle and gotten the latest vaccine for this year’s viral mutations. Remember, respect the androids, even if everyone else seems to be kicking them around. They might just be the future of intelligent life on Earth.

The Forever War by Joe Haldeman

Lightspeed travel has some odd time dilation effects, and nowhere is this clearer than in interstellar warfare. When the brave soldiers of Earth return home, will they recognize the people they are fighting for?

Do Androids Dream of Electric Sheep? by Philip K. Dick

Sci-Fi fans may know this story in its cinematic guise as Blade Runner. In a world where android replicants are virtually identical to humans, Deckard’s job is to suss out the fake from the genuine. As he begins to doubt his own humanity, the definition of “real” becomes dangerously fragile. 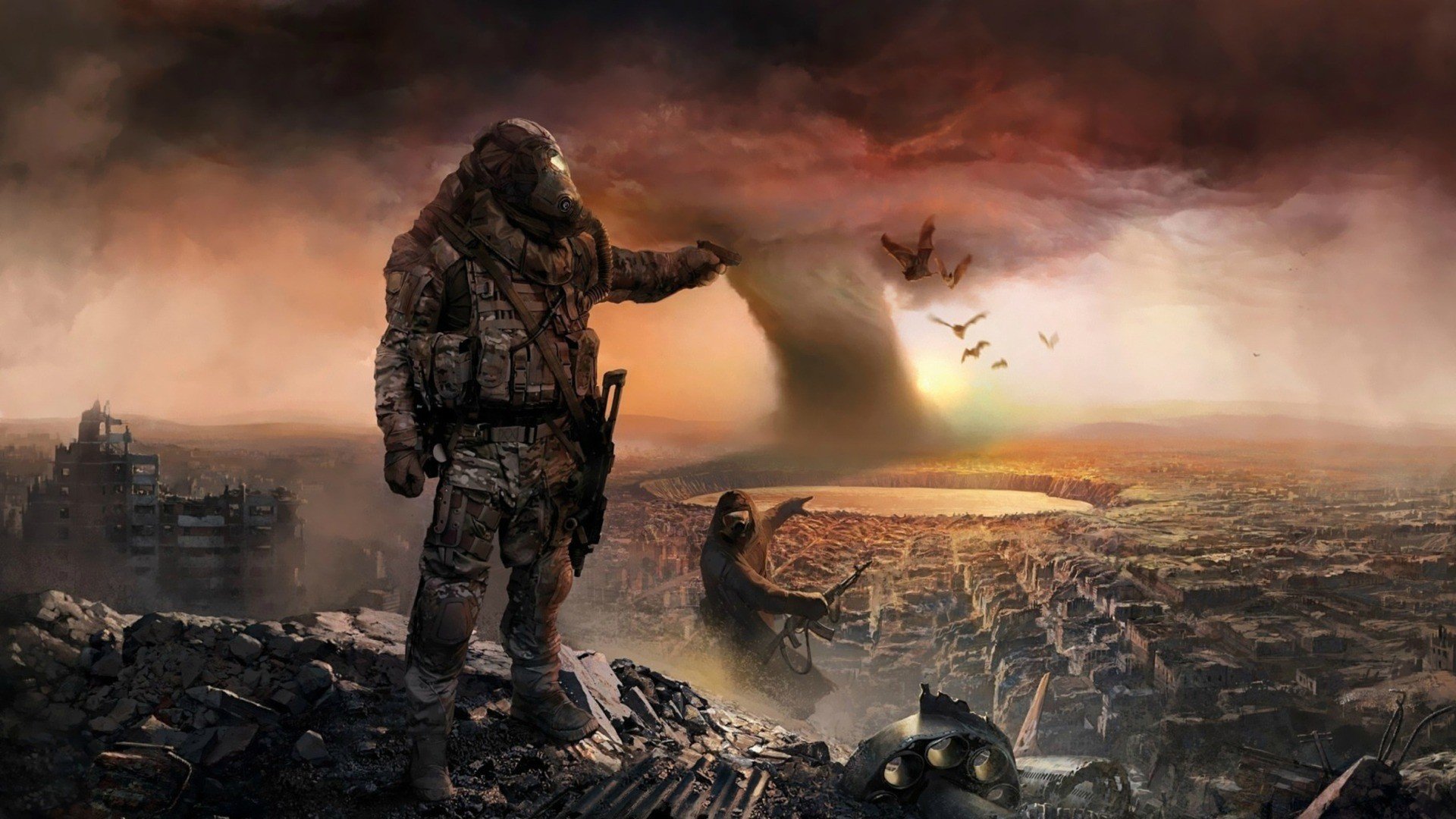 The party’s got to end sooner or later, and as you might expect, it’s sort of a drag when the lights go out. Apocalypse books have captured our imaginations since well before When Worlds Collide, Day of the Triffids and Alas, Babylon. (Try Noah and the flood.) But these days, total destruction is often high literature. And, of course, it’s more fun than ever!

All the world’s a stage, and since the Georgia Flu wiped out most people, it’s a darn empty one. As a troupe of actors travels the Great Lakes, they discover that art can save – or destroy – the survivors.

A toxic atmosphere forces all surviving humans to live in the underground Silo, but not everyone believes that the air up there really is bad. When the sheriff’s wife goes above ground, he’s faced with a choice: follow her and risk death, or remain underground and never know the truth.

A Canticle for Leibowitz by Walter M. Miller, Jr.

After a nuclear apocalypse, an order of Roman Catholic monks struggles to preserve the knowledge of the modern world. But will humanity repeat its mistakes anyway?

What would the future be without zombies? I, for one, don’t care to find out! From World War Z and The Walking Dead to philosophical literature like Raising Stony Mayhall, everyone loves those shambling, moaning, unkillable flesh eaters. Here, have a few more!

Political machinations don’t die with the human species. As zombies attack a Presidential candidate, bloggers uncover the terrifying truth: that someone is using the undead as weapons on the campaign trail.

The Girl with All The Gifts by M. R. Carey

What happens when zombies are smart? What about when the smart zombies are children? The tension between humans and zombies, teachers and students, and researchers and subjects blooms in this critically acclaimed book.

After Andy dies in a car wreck, he discovers that life’s not easy for zombies. In fact, it’s downright hard to get a job, meet people, and have a decent conversation without someone screaming and trying to decapitate you. Enter the fight for zombie civil equality!